Lake Sanabria is the body of water that gives name to this protected space, which is justified by the priceless landscapes that it offers the visitor and its dimensions: a maximum length of 3,178 meters, a width of 1,590 and a surface of almost 320 hectares. If we could look at the profile, we would see that it is formed by two buckets:  the westernmost reaches a depth of 40 meters, while the eastern one reaches 51 meters. 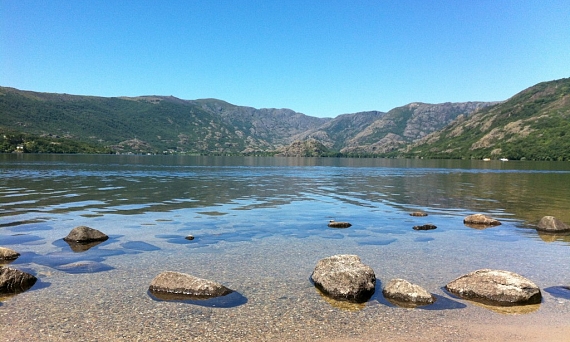 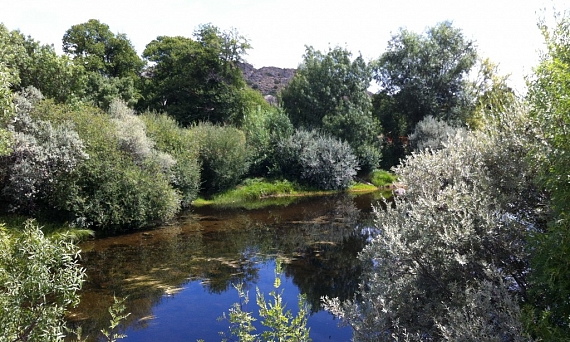 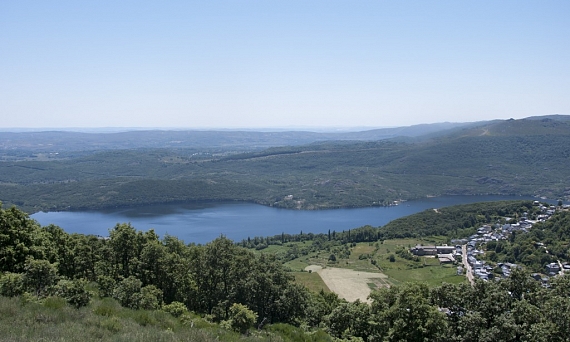 The history of this region is the one of a land that contacted in its evolution with varied cultures, being influenced in different measure of them, but always maintaining its ancestral way of being, doubtlessly due to its orographic isolation.

Among the villages of this region we will highlight the following: 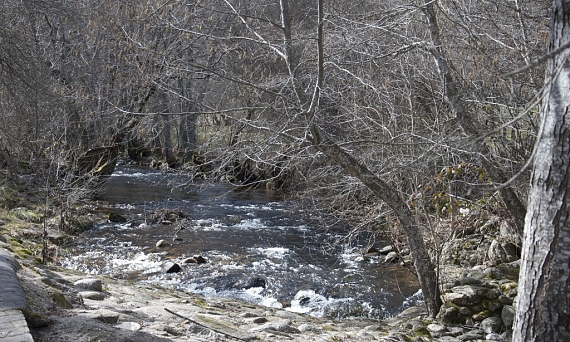 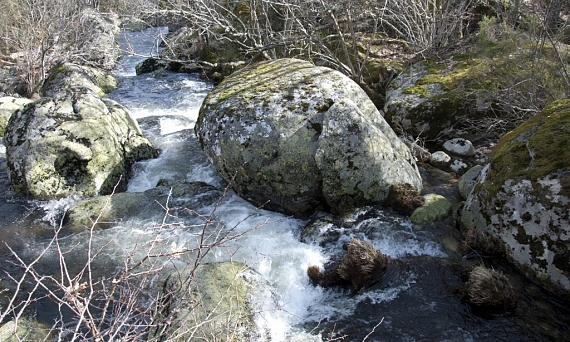 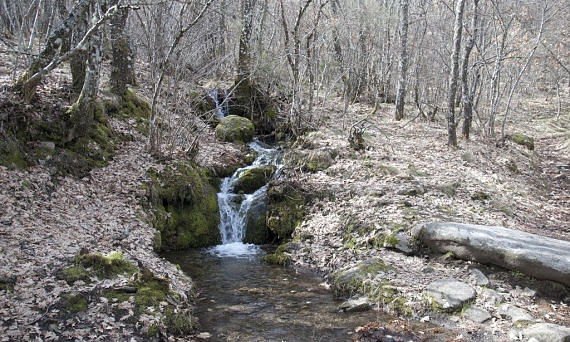 The region of Sanabria in Zamora, offers as its main attraction the location inside it of a lake system of glacial origin with an undoubted ecological value.

Everything is mountain and valley, forests and fields, rocks, lagoons and waterfalls, constituting a wide and unique picture, with the peculiar and colorist variant of each season.

If we want to understand the reason for the current landscape we must go back a few thousand years. It was then when the powerful action of the ice shaped the steep and spectacular environment that we contemplate today.

Most of us conceive ice as a brittle solid, as we are accustomed to seeing it only in thin layers. But when an important thickness of ice has accumulated on the surface of the ground, the one at its bottom behaves like a plastic material, capable of sliding down a slope, which makes it an effective transport agent, in addition to an incredible land modeler. Then we could define a glacier as any natural accumulation of ice on earth, which is or was animated by a movement of translation.

During the Quaternary glaciers, an ice sheet was installed in the upper plains of Sierra de Segundera and Cabrera, from which glacier tongues ??radiated in all directions, accommodating especially to the pre-glacier river valleys. It was, therefore, a plateau glacierization as a large ice cap covering the upper parts of the two mountain ranges that possibly in the coldest times could be linked to the glacial cirques of area of La Baña in Leon. As the ice recessed, the snow was concentrated in the cirques set at the foot of the high peaks, among which the Tera was the most outstanding as its ice tongue reached an extension of 20 kilometers in length. The force and morphogenetic activity of it explains the typical trough form that presents the current Tera valley, which resembles the shape of a "U", that is, a flat and wide bottom that contrasts with almost vertical slopes. The maximum development of the glacier was reached at the confluence of the valleys of Cárdena and Segundera, through which each tongue advanced, dramatically increasing the volume of ice where Lake Sanabria is located nowadays. Here, the thickness of the ice was around 500 m, as it can be seen following the left lateral moraine, placed  at about 1500 m altitude. To the east of the lake, the volume rapidly declined, though still reaching considerable dimensions, about 150 m thick. The pressure exerted by this solid mass on the rocky substrate is evident in the bottom of the lake itself, where a threshold separates two large cavities: one of 46 meters and another of 51 m of depth, which must correspond to the two centers of maximum pressure.

When the glacier recessed, the glacial debris transported was deposited frontally or laterally, forming morainic arches of complexity and esthetics unequaled in the rest of Spain. Frontal glacial deposits reached a width close to 2.5 kilometers, being arranged concentrically in beautiful arches, which facilitated the damming of the waters of the thaw. Lateral moraines appear like great hills, reaching in their development until 6 kilometers of length. Such deposits are formed mostly by blocks of stone. Some of them surprisingly large, between 975 and 1600 m, which indicates a complex operation of the glacial stages, as well as the processes of accumulation.

Although Lake Sanabria is the maximum expression of the modeling effect that glaciers had in this area, it is not however the only one perceptible in the eyes of the visitor. Thus there are numerous lagoons distributed mainly by the high lands of Segundera and Cabrera, fruit of its incisive action. We can also see numerous morainic till scattered throughout the valleys and peaks, although in most cases it is difficult to perceive. 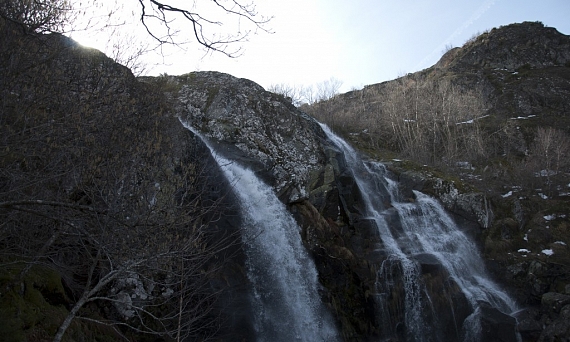 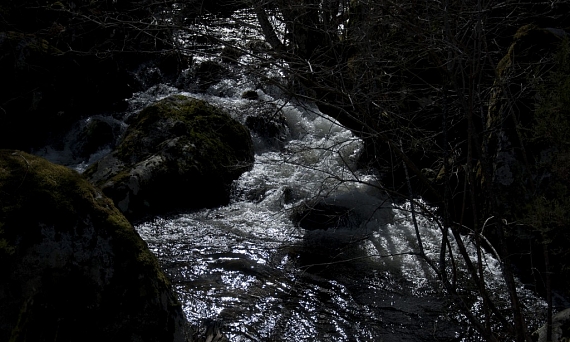 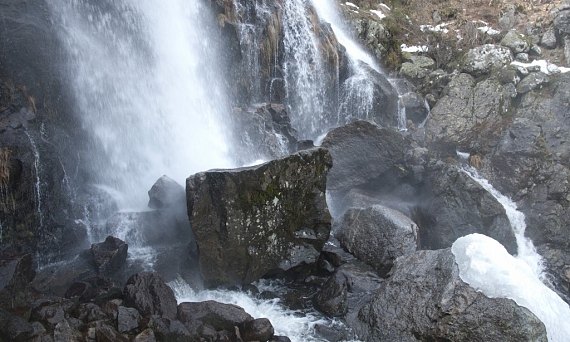 The Force of Ice

Southern foothills of the mountains of Cabrera and Segundera have about thirty glacier lagoons, some of them of extraordinary magnificence, which form part of the Nature Park of Lake Sanabria. Located in places of difficult access, they have remained almost immune to the alteration by human intervention.

Lake Sanabria is the body of water that gives name to this protected space, which is justified by the priceless landscapes that it offers the visitor and its dimensions: a maximum length of 3,178 meters, a width of 1,590 and a surface of almost 320 hectares. If we could look at the profile, we would see that it is formed by two buckets:  the westernmost reaches a depth of 40 meters, while the eastern one reaches 51 meters. 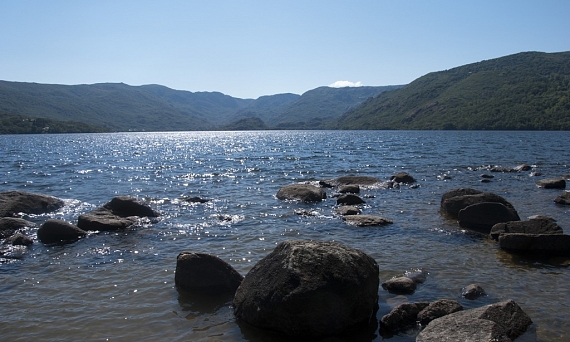 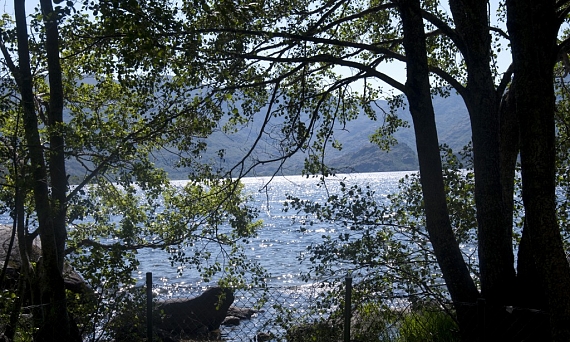 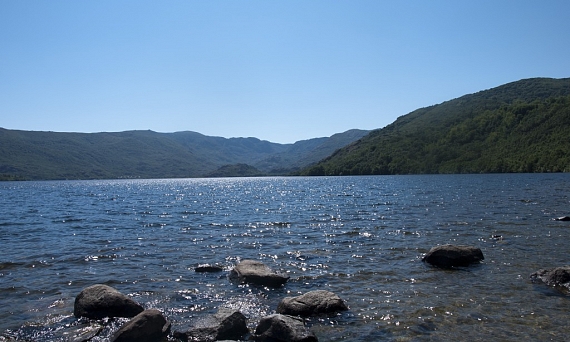 The area of Lake Sanabria is surrounded by the presence of 1500 plant species, as a result of the encounter between Mediterranean and Atlantic flora. More than 140 species of birds, with abundance of raptors, share a sky from which they contemplate a rocky landscape that preserves intact the footprints of the last glaciers. 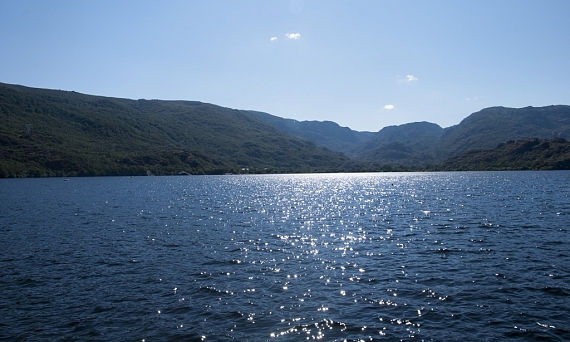 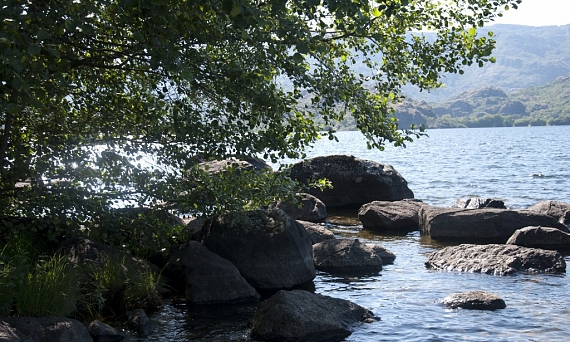 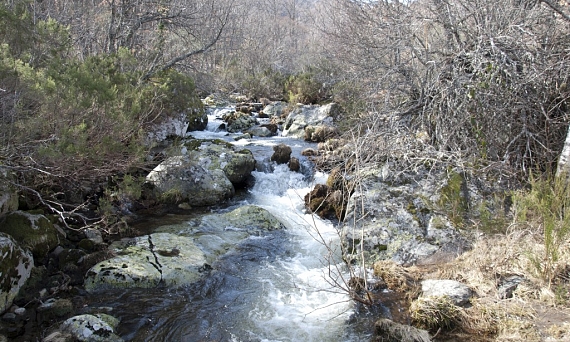 A natural area as affected by water as Sanabria is home to a number of animal species linked to this environment. Among them, several types of fish find their habitat in the lake, the lagoons, the rivers and streams of transparent water, that descend meandering from the mountain. It stands out the presence of the trout, very much appreciated for sport fishing as well as a delicacy on the dish.

142 species of birds fly over this Nature Park including diurnal birds of prey such as the golden eagle, the honey buzzard – so called because it feeds on bees -, the peregrine falcon, the buzzard, the kestrel and the eagle owl, along with birds such as the red-bellied shrike, the yellowhammer, the bluethroat, and the grey partridge, locally called 'charela'. Among the oak forests you can see the common bullfinch, the robin, the jay, the hoopoe...

Together with the trout, which variety in Lake Sanabria can reach considerable dimensions and its flesh has a pink color that reminds of salmon, other species also live in the same waters such as: the “bermejuela” (Achondrostoma arcasii), the chub or the barb. As regards mammals, there are 41 species present: the elusive Pyrenean desman, several mammals of greater size such as: roe deer, wild boar and junglecat. 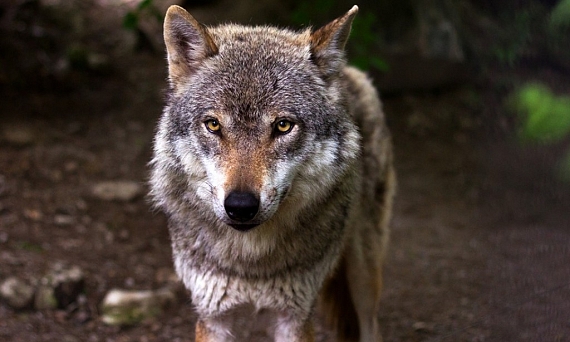 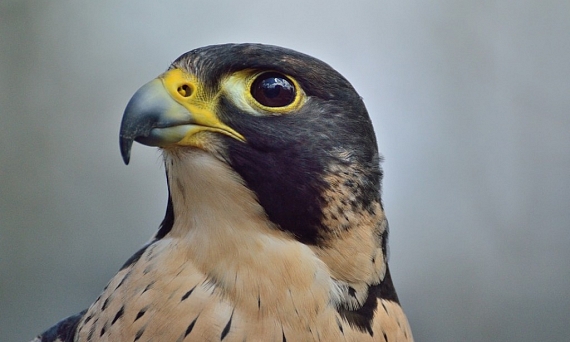 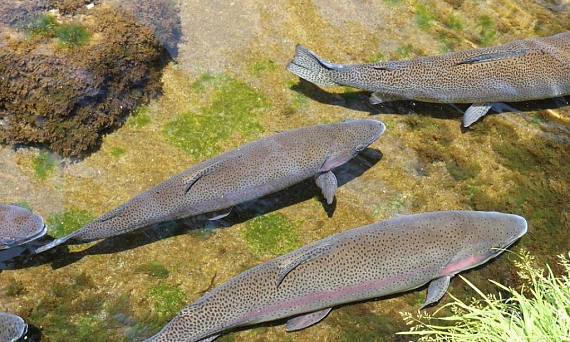 The 22,000 hectares of the Nature Park of Lake Sanabria offer a unique environment to nature lovers, with a specific flora of great richness that exceeds the 1,500 species. The oak stands out on this botanical diversity in its entire splendor, with groups of trees that look out over the lake to almost kiss its transparent waters.

The oak, or 'Quercus pyrenaica' adapted to the cold and capable of withstanding long periods without water, is very common in Tera’s basin and in the slopes of the Mountain range of Segundera. It is called 'carballo' in this part of Zamora and since old times has been a very important part in the domestic economy in Sanabria by providing its inhabitants with solid structures for their houses and wood for their homes. In addition to the oak, the great lord of these lands, the forests are taken by formations of scrub, such as the broom, the heather, or the shrub.

The chestnut is also a representative species in the park, although it appears very scattered. In the upper and middle part of the Tera it appears the holly. The yews, many of them centennial, are also in ravines and slopes, mixed with oaks. On the banks of the River Tera and on other rivers and ravines there are alders, ash trees and willows, while throughout the Park you can see the rowan, the gean, the hazel tree and the birch.

Among all the forest masses of the province "El Tejedelo", in Requejo are the most outstanding located  in the area of Sanabria, one of the most important and best preserved yew areas in the Iberian Peninsula. 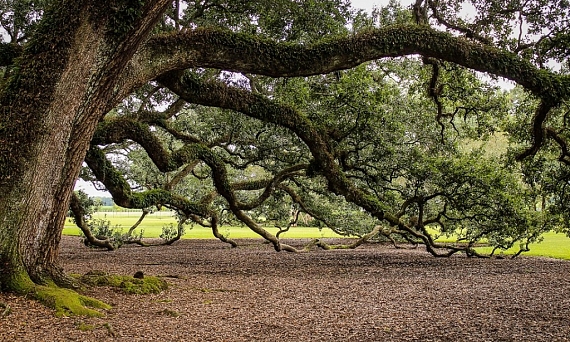 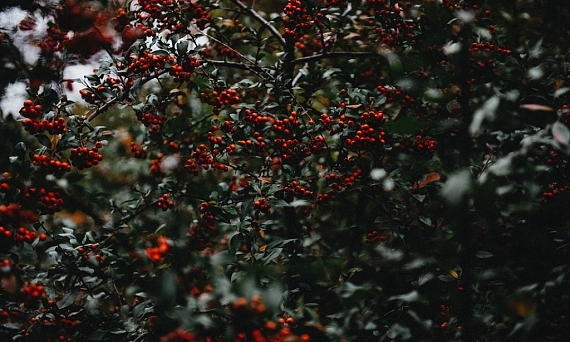 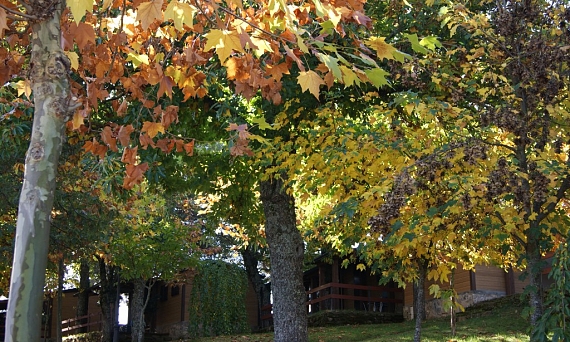